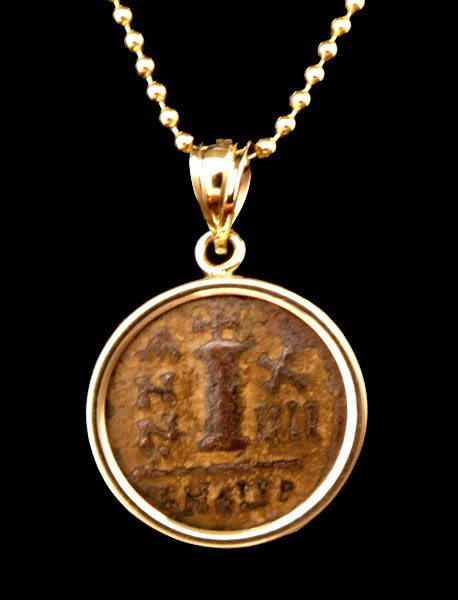 DISPLAYED WITH A MEDIUM BEAD CHAIN

This beautiful small ancient bronze Roman Byzantine coin is called a DECANUMMIUM.  It is set in a simple, high-polished 14KT yellow gold pendant setting.  The warm, pumpkin orange and chocolate brown patina highlights the detail of the coin and perfectly compliments the warm yellow of the surrounding gold.  This coin is mounted with the reverse side showing a prominent letter 'I' which means 10 or ten nummi, the denomination of the coin.  The letters ANNO to the left stands for "Year of Reign of the Emperor" and the inscription to the right translates to the 17th year.  A small cross is seen above the "I".

Perfect for someone who has the letter "I" in their initials, or to commemorate an event or anniversary of either 10 (the denomination of the coin) or the 17th anniversary of an event.  The handsome appearance of this piece is easily worn by either a man or woman and would most certainly, make for a unique, unforgettable gift!

As a result of the Byzantine coinage reform carried out at the end of the fifth century AD, a whole new range of denominations was brought into being each clearly marked with it’s value as a multiple of the basic ‘nummus’.  The Christian religion that permeated the Byzantine culture influenced decisions to use Greek numerals for the new coins as Greek was the language of the New Testament.  The largest denomination, the FOLLES, bore the mark of value “M” (40 nummi), the HALF FOLLES “K” (20 nummi), the DECANUMMIUM “I” (10 nummi), and the PENTANUMMIUM “E” (5 nummi), introduced at a later period.  Over time, imagery used on the Byzantine coinage became increasingly religious.  A portrait of Christ first appears on coinage of Justinian II (685-695 AD).  Religious images were later banned in 815 AD during the Iconoclastic Period but restored in 843 AD under the empress Theodora.