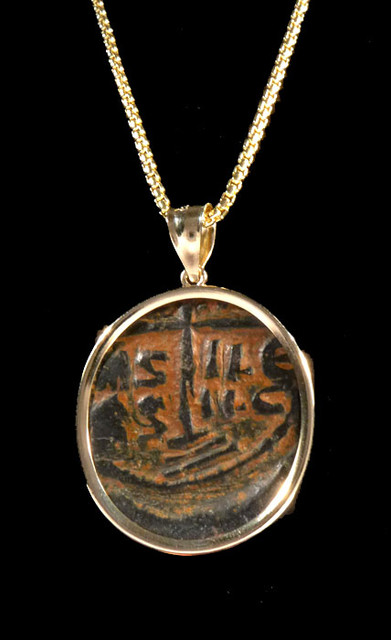 DISPLAYED WITH A ROUND BOX CHAIN - MEDIUM

This stunning and large ancient bronze Byzantine coin is set in a 14KY gold which perfectly compliments the rich pumpkin orange and chocolate brown patina. This coin is called an anonymous bronze Folles because the ruling emperor was not depicted on the obverse but instead, Christ. The reverse which has been mounted facing out as shown, boldly states its message of Byzantine Roman Christianity, "IhSUS XRISTUS bASILEU bASILE" which translates to "Jesus Christ, King of Kings".  An impressive antiquity of ancient Christianity and highly recommended. This coin was minted under the rule of Michael IV and is about the size of a U.S. half dollar.

The anonymous bronze folles series was a revolutionary design in Byzantine coinage. For countless centuries even dating back to the early Roman Empire, coins always featured an emperor and promoted the emperor's rule.  As Christianity dominated the Roman Byzantine Empire, a break from tradition was instituted in their coin folles issues to purposely promote Christ and not a man, not even the emperor himself during his own rule. This was in keeping with Christian beliefs that man is insignificant in the light of God and no man should be worshipped but God alone. These coins typically feature an image of Christ looking straight at you on the obverse side with the reverse boldly written in Greek, "In Christ, Victory" or "Jesus Christ, King of Kings".

As a result of the Byzantine coinage reform carried out at the end of the fifth century AD, a whole new range of denominations was brought into being each clearly marked with it’s value as a multiple of the basic ‘nummus’.  The Christian religion that permeated the Byzantine culture influenced decisions to use Greek numerals for the new coins as Greek was the language of the New Testament.  The largest denomination, the FOLLES, bore the mark of value “M” (40 nummi), the HALF FOLLES “K” (20 nummi), the DECANUMIUM “I” (10 nummi), and the PENTANUMIUM “E” (5 nummi), introduced at a later period.  Over time, imagery used on the Byzantine coinage became increasingly religious.  A portrait of Christ first appears on coinage of Justinian II (685-695 AD).  Religious images were later banned in 815 AD during the Iconoclastic Period but restored in 843 AD under the empress Theodora.

As a modern representative of one's Christian beliefs, wearing a pendant featuring one of these genuine ancient Christian Roman coins is a far more unique display of one's faith compared to a modern made, mass-produced cross on a chain.