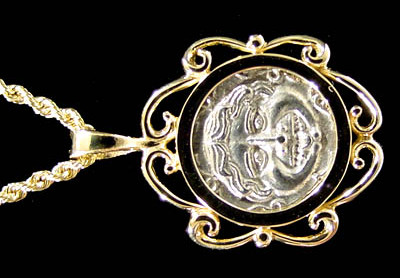 This stunning piece just screams ANCIENT GREECE with beauty and artistic style that only that magnificent kingdom of long ago can lay claim to.  This handsome 14K yellow gold coin pendant with its open scroll work perfectly mimics the scroll decoration IN THE COIN!  See for yourself in the photo above.  You couldn't ask for a more fitting setting!  This cast pendant setting wonderfully displays a GENUINE ancient Greek silver hemidrachm featuring the facing head of a gorgon, a very unique and refreshing angle of the subject compared to most side profiles used on coins even of the ancient Greeks.  This coin was minted in the Greek city of Parion, at the height of Greek culture and art and is the essence of Classic Greece.  The gorgon was a famous Greek monster but why its face was used on these coins from Parion is still a mystery.

In classic Greek art, the gorgon was depicted in a variety of instances on pottery, stone carvings and sculptural relief along with being a subject on some coins.  The gorgons were always shown facing the viewer, protruding tongue, and teeth.  Very early ones were sometimes depicted with beards, but never on coins.  In Greek mythology the gorgons were three hideous sisters who had monstrous teeth and claws.  Their origin is explained as follows.  Medusa and her sisters were extremely beautiful and worked as priestesses in Athena's temple.  After Poseidon and Medusa laid together, Athena became enraged and turned the sisters into monsters.  Although some claim Medusa's face was changed to represent the hideous Gorgonieon look of her sisters, others say Athena allowed her face to remain unchanged.  Because of this, Medusa was still able to use her beauty to seduce men and then turn them to stone.  Upon the transformation, Medusa's two sisters became immortal, Stheno (Might) and Euryale (Wide Flowing Sea) but Medusa (Queen), retained her mortality.  Medusa was finally decapitated by the hero Perseus.

The hair of gorgons was never depicted as living snakes in ancient times.  If any snakes were used they were always depicted near or sometimes in the hair but not as the hair.  Sometimes the gorgon head had wings, but never on the coins of Parion.  It isn't clear why Parion chose a hideous monster as an emblem for the city.  Perhaps it was chosen as a symbol of terror. It was used on Greek shields to frighten the enemy as well as for it's hypnotic ability--something about the gorgoneion attracts gaze of enemy soldiers toward the shield and thus away from the weapon hand. Could the gorgon head on Parion's coins represent military shields and ability of Parion's military?