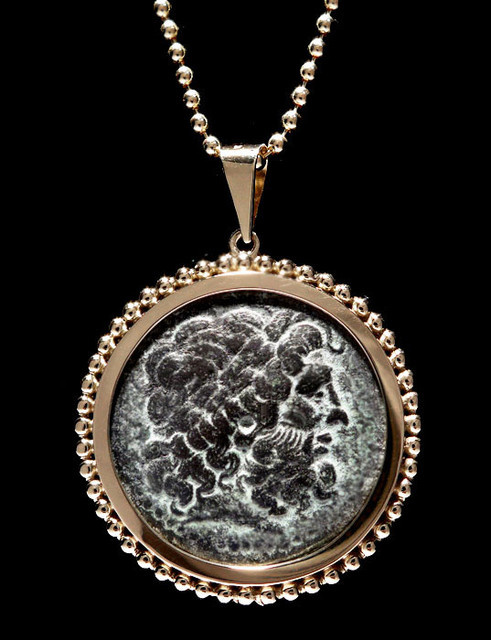 DISPLAYED WITH A BEAD CHAIN - THICK

This exceptionally beautiful and large bronze ancient diobol coin was minted under the rule of Ptolemy II, Philadelphos.  It shows a perfectly centered and highly detailed obverse and reverse.  The obverse, displayed outward in the pendant setting, shows an intricate rendition of the bust of Ptolemy II.  The reverse shows a large standing eagle holding a lightning bolt in its talons.  The dark charcoal underlying patina is highlighted by a cool mint green encrustation that perfectly shows off the artistry of the coin.  This is a large piece that when worn, will most certainly be the focus of attention at any social event.  It is mounted in a handmade 14K yellow gold beaded design bezel pendant setting that wonderfully contrasts with the color of the bronze ancient coin.  The Ptolemaic Dynasty was the final dynasty of ancient Egypt.

The Ptolemaic Dynasty was a Macedonian Greek royal family which ruled the Ptolemaic Kingdom in Egypt during the Hellenistic period. Their rule lasted for 275 years, from 305 BC to 30 BC. They were the last dynasty of ancient Egypt.

Ptolemy, one of the seven somatophylakes (bodyguards) who served as Alexander the Great's generals and deputies, was appointed satrap of Egypt after Alexander's death in 323 BC. In 305 BC, he declared himself King Ptolemy I, later known as "Soter" (saviour). The Egyptians soon accepted the Ptolemies as the successors to the pharaohs of independent Egypt. Ptolemy's family ruled Egypt until the Roman conquest of 30 BC.

All the male rulers of the dynasty took the name Ptolemy. Ptolemaic queens, some of whom were the sisters of their husbands, were usually called Cleopatra, Arsinoe or Berenice. The most famous member of the line was the last queen, Cleopatra VII, known for her role in the Roman political battles between Julius Caesar and Pompey, and later between Octavian and Mark Antony. Her apparent suicide at the conquest by Rome marked the end of Ptolemaic rule in Egypt.

Ptolemy II Philadelphus, 309–246 BC, was the king of Ptolemaic Egypt from 283 to 246 BC. He was the son of the founder of the Ptolemaic kingdom Ptolemy I Soter and Berenice, and was educated by Philitas of Cos. He had two half-brothers, Ptolemy Keraunos and Meleager, who both became kings of Macedonia (in 281 BCE and 279 BCE respectively), and who both died in the Gallic invasion of 280–279 BCE. Ptolemy was first married to Arsinoë I, daughter of Lysimachus, who was the mother of his legitimate children; after her repudiation he married his full sister Arsinoë II, the widow of Lysimachus.

During Ptolemy's reign, the material and literary splendour of the Alexandrian court was at its height. He promoted the Museum and Library of Alexandria, and he erected a commemorative stele, the Great Mendes Stela.