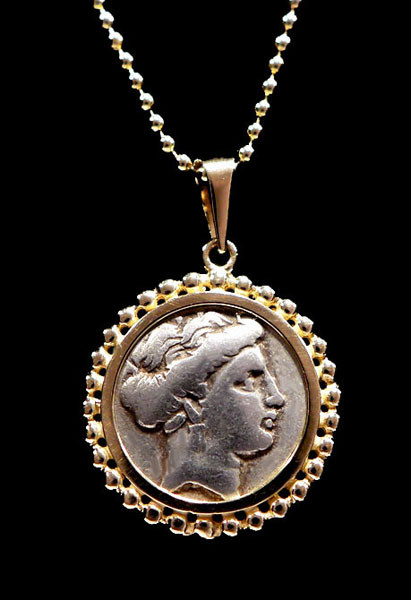 DISPLAYED WITH A BEAD CHAIN - MEDIUM

This stunning coin is a GENUINE ancient Greek silver hemidrachm showing a beautiful head of a nymph with the reverse showing an eagle grasping a serpent.  The setting is designed to be worn with the nymph showing outward but the reverse is shown for reference.  The coin was minted in the early fourth century B. C. on the ancient island of Euboia in Greece.  It is mounted in a richly designed handmade 14K yellow gold beaded design bezel pendant setting which wonderfully compliments the ancient style of the artwork in the coin as well as contrasts with the color and luster of the silver ancient coin.

Nymphs were often mentioned and featured in Greek mythological stories and themes.  Nymphs were female spirit maidens who lived in mountains, groves, and by springs, rivers and fountains in the ancient world.  They were often the sexual targets of Satyrs who were male spirits that roamed the forests in search of satiating their lust with these fair spirits of beauty.  It was believed the the beauty of the wilderness was crafted by Nymphs.  The care of the wild plants and the animals was also attributed to the loving tending of Nymphs.

This piece typifies the beauty of Greek mythology and ancient Greek art styles.  The detail, preservation and center of the strike on BOTH sides makes supreme grade ancient coin an unforgettable centerpiece for a unique ancient coin jewelry necklace!