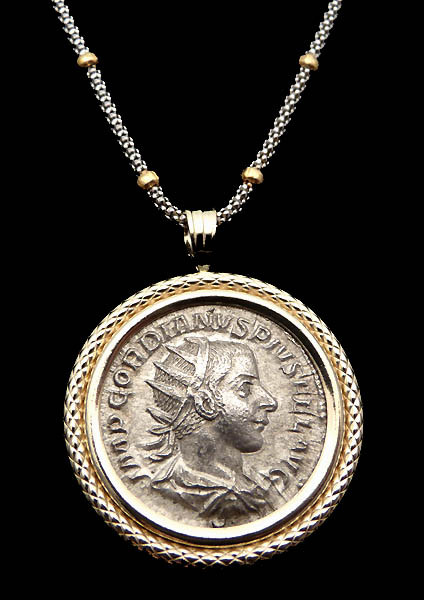 This extra fine ancient silver antoninianus coin posesses exquisite detail and is of a perfect center strike.  It features the Roman emperor Gordian III with a fantastic depiction of the Roman god of war, Mars on the reverse, not shown.  The snakeskin wreath that frames the coin makes for a beautiful presentation and contrasts wonderfully with the bright pure silver of this artifact.

Being only 19 years of age, Gordian was influenced heavily by his household acquaintances. During his reign, the Persians again invaded Syria. When Gordian entered Antioch at the head of a large army, the Persians immediately retreated. However during his stay, Gordian's total reluctance on his mother and other family members became clear. Thus the eastern armies opted for a new commander and the tragic cycle continued as young Gordian was killed.