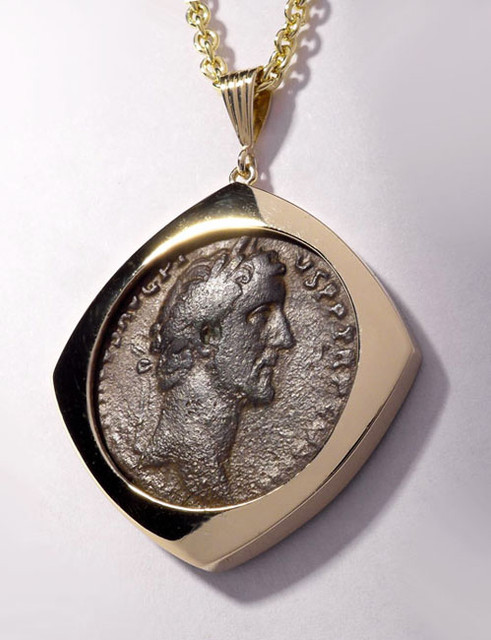 DISPLAYED WITH A THICK FORSANTINA CHAIN.

Superb in every way! This very large ancient Roman bronze sestertius coin was minted during the reign of Antoninus Pius and features a detailed profile of the emperor displayed.  The diamond-shaped cast 14KY gold pendant setting shows a bold polished geometric design which compliments the rich copper patina in the coin. This stunning piece represents the splendor of ancient Roman art. The ancient bronze possesses a warn, rich patina that makes for a gorgeous contrast with the high polished yellow gold setting.  The reverse side of the coin shows the goddess, Salus, seated and feeding a serpent that is coiled around and rising up from an altar on the left.

Antoninus Pius was one of the few Roman emperors who maintained a record lacking the typical corruption of Roman rulers. He did not come from a military background and instead, concerned himself with the direct administration of the Empire, never leaving Italy during the entirety of his service as Emperor. During his rule of 23 years, he organized great festivities to celebrate Rome's 900th anniversary! Widely respected and loved, his reign brought an unprecedented "golden age" of peace and prosperity to the Empire known and commemorated later, as "PAX ROMA", or "the Peace of Rome". Antoninus Pius died of natural causes in March of 161 A.D..

During his rule of twenty three peaceful years, he organized great festivities to celebrate Rome's 900th anniversary!  Faustina Senior was loved very much by her husband.  They lived happily together during one of the most peaceful and prosperous periods of Roman history.  At her untimely death in 141 A.D., Antoninus Pius was shattered and greatly mourned his beloved.  He declared his wife a goddess and had a temple built and consecrated in her name.  Coins bearing the inscription "DIVA FAUSTINA" were issued to commemorate her and unique to these issues, she was shown with an elegant and elaborate hair style decorated with interwoven strands of pearls.

Like her husband, Faustina was highly respected by all of Rome.  She was very active in charitable works and the betterment of the lives of the poor.  Upon her death, Antoninus Pius established a charity organization and fund for impoverished girls in her name, calling it the "Girls of Faustina".

In contrast to the typical bizarre and severely dysfunctional families of past emperors, the rule and family of Antoninus Pius was one of ethics and family values.  Both Antoninus Pius and his adopted son and succeeding ruler of Rome, Marcus Aurelius, along with their respective wives, Faustina Senior and Faustina Junior, can be viewed upon as some of the most stable and respected members of the Empire's ruling family in all of its history.

The sestertius was a big bronze coin of the later Roman republic and early Roman empire.  These big coins gave the engraver a lot of surface area.  Obverse portraits were detailed and lifelike.  The reverse images could transmit complex themes and ideas.  The sestertius was the primary denomination of accounting in Roman business.  Payment made in silver denarii or even in gold would always be counted in sestertii.  The value conversion was one sestertius equaled a fourth of a silver denarius.  There were 100 sestertii to an imperial aureus, the primary Roman gold coin of ancient times.