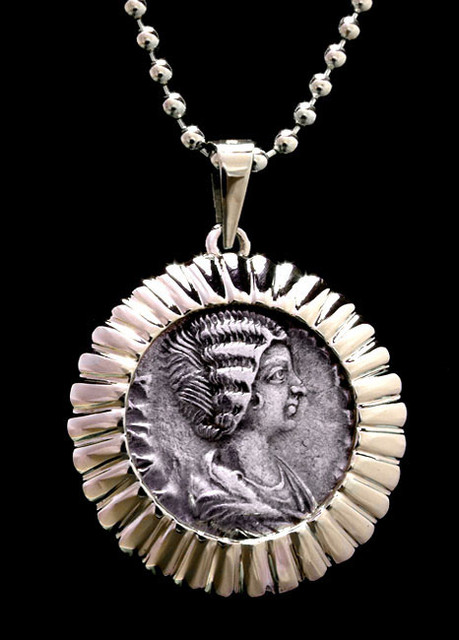 Set in a cast, high-polished 14KT yellow gold radiating setting, this hand-made pendant features a genuine silver ancient Roman denarius of the Empress Julia Domna.  The Empress is shown in her earlier years with her signature hair style and in the historical 'prime' of her life.  The reverse shows the Roman goddess of VESTA seated on a throne.  Vesta was the patron goddess of hearth, home and domestic Roman life.  The unique setting shows a circular design meant to represent a hearth, framing the profile of Julia Domna.  This design is signifies the Sacred Hearth of Vesta.  The rich luster of the silver denarius coin contrasts well with the warm 14KY gold and makes for an unforgettable piece of jewelry.

All temples of Vesta were round and a hearth with a sacred fire that was continuously kept burning, was to show association with the common Roman home.  Since Vesta was goddess of the hearth, she was also the patron goddess of the bakers of the city and, as the donkey turned the millstone to grind the wheat for the bread, the animal became closely associated with the goddess, as well. She is also frequently depicted holding a kettle (a symbol of the hearth) and also cut flowers (symbolizing domesticity). Like the goddess Bastet in Egyptian belief, Vesta was of special service to women but was popular with both sexes. She was the proctectress of Rome in that she cared for and maintained the homes of each of its citizens. The importance of Vesta to ancient Roman religion was exemplified by the establishment of the Vestal Virgins, the only Roman college ever established of full-time priests.

Julia Domna was one of the most powerful people in the Roman Empire during the period from A.D. 193 to 217.  While her emperor husband, Septimius Severus, was fighting rivals, pursuing rebels, and subduing revolts in the far corners of the empire, Julia Domna was left to administer the vast Roman Empire.  She proved to be an able administrator, playing one powerful general or senator against another, while keeping herself from falling into the many traps set by political enemies at court.  Septimius often sought her advice, as did Caracalla when he ascended the throne after his brother's murder.  She was also a patron of the arts and invited the most brilliant philosophers, writers, and other artists in the Roman world to grace her court and keep learning and culture alive in a world that was destined to fall onto chaos within less than a generation.

Julia was a woman who was accustomed to power, but this came to an end after the murder of her son Caracalla in A.D. 217.  Hers had also been a life filled with many sorrows.  Caracalla had murdered his brother Geta in her private apartments even as the younger son sought protection in Julia's arms.  After Macrinus had murdered Caracalla and seized the throne, he sent her away from Antioch after it was reported that Julia was inciting troops to rebel against him.  At this time, she was believed to be about fifty years old and was suffering from a painful illness, probably cancer of the breast.  Rather than face exile and the humiliation of being reduced to the status of a private citizen, she elected to commit suicide by starving herself.

Even at this later date when the finest of numismatic art belonged to the past, the portraits on her coins accurately depicted her face.  On the coins from early in the reign of her husband, we see the face of a strong young woman, but we see a cynical face hardened and lined with age in her later portraits.

This coin of Julia Domna in her youth depicts a beautiful and powerful Julia, minted at what was, most likely, the happiest days of her life.  No coin could offer finer detail and preservation as this example.  Virtually UNCIRCULATED!!!  HIGHLY RECOMMENDED with detail and relief rivaling any of the finest possible numismatic specimens of Imperial Rome!