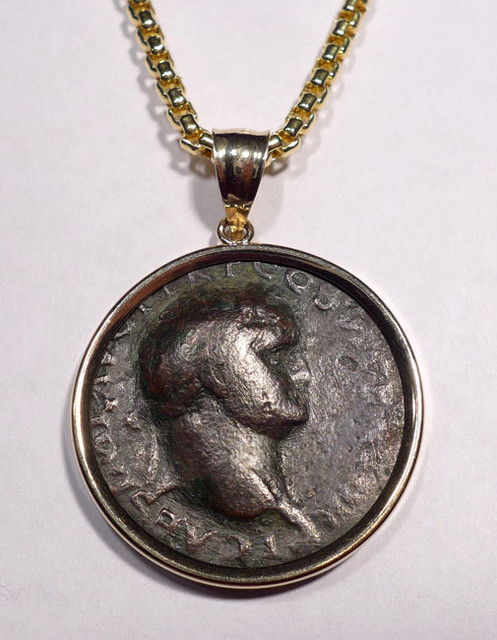 DISPLAYED WITH A THICK ROUND BOX CHAIN

This bold and robust ancient Roman As coin featuring Vespasian, displays a very high relief profile of the emperor with a reverse side showing a temple.  The temple signifies Vespasian's rebuilding of the Temple of Peace, appropriate for a period of peace that Romans enjoyed under his rule.  Set in a 14K yellow polished gold simple pendant setting, this piece would be perfect as a bold and impressive expression, for either a man or woman.  The dark brown patina makes for a wonderful contrast to the high polished yellow gold.

Under Vespasian, peace and tranquillity had been restored to the Roman world.  In less than 100 years, the third civil war had come to an end. This era of restored peace was promtoed on the coinage of Vespasian with several issues showing a reverse side depicting the Temple of Peace.  A Temple of Peace was erected in a new addition to the Forum of Vespasian. The Temple of Vesta had burned down twice in written history In 64 AD, the Great Fire of Rome destroyed most of Rome, including the Temple of Vesta. It was said by Cassius Dio to have been started by the infamous Nero, but according to Tacitus, Nero was at Antium at the time of the fire. Nevertheless, we find that Vespasian issued coins showing the Temple of Vesta had been reconstructed.

The Roman Imperial system received a new set of reforms ordered by Vespasian.  In 73 AD, Vespasian assumed the powers of Censor and appointed new members to the Senate of Rome. His appointments included men of different origins from all the provinces and for the first time the Senate began to reflect the true international scope of the Empire.  Vespasian also annexed territories in the East and reorganized the provinces.

Vespasian was one of the most gentle of all the Roman emperors. He appreciated a good joke, even when he was the butt of it. He never had an innocent man punished, and even wept for condemned criminals when it was necessary that they be executed. He was an old soldier, and would often show kindness to other old soldiers. His father was a tax collector, and Vespasian himself had to become a mule driver after he was banished from Nero's court having fallen asleep during one of Nero's performances. Later, Nero made him a general and put him in command of an army sent to put down a revolt in Judea. When Vespasian became emperor his son Titus replaced him as general in Judea and finally put down the revolt in A.D. 70 with the tragic destruction of the temple in Jerusalem.

He was never ashamed of the fact that he was the son of a common man, unlike all the emperors before him who had come from aristocratic families. People occasionally made fun of his Latin pronunciation, and he would sometimes just turn the joke around on them. One day he asked a famous comedian, "Why don't you make a joke about me?" Since Vespasian usually had a strained expression on his face, the comic replied, "I will, as soon as you’re finished going to the bathroom!" Most other emperors would have had the man's head, but Vespasian just took it all in stride and laughed along with the others.

One famous example shows how much he really did care for the ordinary Roman citizen. An engineer had come up with an ingenious method for moving some heavy stone columns being used in the construction of a public building. "I must always make sure that there is enough work for my laboring classes to make a living," he replied and decided to employ laborers instead. Nevertheless, Vespasian thanked the man and rewarded him handsomely.
Vespasian died on June 23, A.D. 79 after a short illness. As he was at the point of death, he struggled to stand up, saying that an emperor should die on his feet. He even made a joke about his own death. It was the custom to consecrate popular emperors after their deaths, declaring them a minor god. Vespasian was heard to say as he was about to expire, "Oh my, I fear I am about to become a god!"