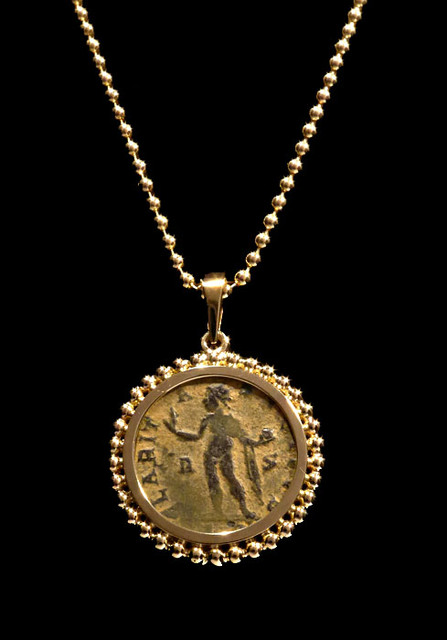 This exceptional Roman bronze coin was minted during the rule of Constantine II, one of the sons of Constantine the Great (Rome's first Christian emperor).  It is set with the reverse side showing a mint condition detailed image of SOL, the Roman sun god.  He is holding up his right hand with the globe in his left.  The inscription CLARITAS REIPVB translates to the "brightness of the Republic (or State)".  The dark brown underlying patina on the bronze coin is highlighted by the bright golden caramel color of the mineral encrustation.  It is set in a beautiful, hand-made 14K yellow gold beaded pendant setting.  This coin features superb detail and relief and would make an excellent and memorable gift for any "sun lover" or one who appreciates ancient history as well as one of Roman (Italian) descent.