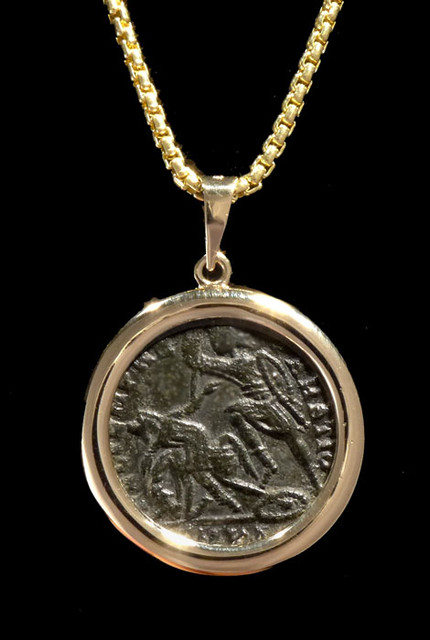 DISPLAYED WITH A MEDIUM ROUND BOX CHAIN

This exceptional Roman bronze coin was minted during the rule of Constantius II, one of the sons of Constantine the Great (Rome's first Christian emperor).  It is set with the reverse side showing a magnificent image of a Roman mounted soldier spearing a fallen Persian enemy.  It is set in a beautiful, cast high polish 14K yellow gold pendant setting.  This coin features not only the finest possible detail and relief, but a beautiful dark chocolate patina. The generous size of this coin and setting allows either a man or woman to wear it well.

Since there was no TV, radio or newspaper to spread propaganda in ancient times, coins were used to disseminate a message.  In 348 A.D., to commemorate the 1,100th anniversary of the foundation of Rome, Constans and Constantius II minted a fantastic series of silver, billon and bronze coins with the inscription on the reverse, "FEL TEMP REPARATIO" which means, "Good Times are Here Again".  The coin used in this pendant is one of those coins.