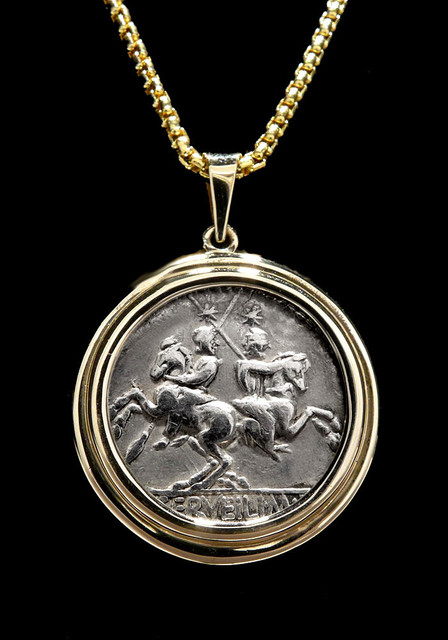 DISPLAYED WITH A MEDIUM ROUND BOX CHAIN

This remarkable antiquity from the early days of the Roman Republic and minted in 136 B.C., is a very fine GENUINE ancient Roman silver denarius coin set in a cast high polished 14 yellow gold pendant.  The coin is mounted to display the reverse image of the Roman Gemini twins - the Dioscuri (in ancient Greek, the Dioskouroi).  They are shown in their classic pose, looking at each other on passing, rising horses, in full battle armor and with stars above their heads to signify their eternal existence in the constellation Gemini.  The obverse (on the back of the pendant), shows a helmeted bust of Roma and an inscription showing the coin was minted to honor Servilius.

If you or someone you love is a GEMINI sign, born May 22nd to June 21st, or if you are a twin, then this ancient coin pendant would have fantastic meaning for you.  Since the Dioscuri twins were worshipped by ancient sailors for favorable winds and protection at sea, this pendant would also make a perfect gift to anyone that loves boating or is a sailor.

The Dioscuri, Castor and Pollux, are the two twin sons of Jupiter (Zeus) and Leda.  These brothers were most affectionate: they never strove in rivalry for the leadership and they never acted without consulting each other, which is a distinctive mark of real brotherhood.  Poseidon gave them the power to aid shipwrecked men, stilling winds and waves

The Greek word Dioskouroi means " Sons of Zeus ".  Dios is the genitive of Zeus and kouroi is the plural of kouros meaning boy or son.  The Romans referred to them as the Dioscuri.

Zeus transformed them into the constellation Gemini so the Dioscuri are often shown wearing pointed caps with stars around them with each brother riding a horse.  Castor and Pollux are the brothers of Helen and Clytemestra and they appear on many second century BC Republican coins.

The artwork and execution of style is classic ancient Rome and the detail has been wonderfully preserved since it was minted over 2000 years ago.  A rare and beautiful masterpiece!

ALL PURCHASES ACCOMPANIED WITH A WRITTEN GUARANTEE OF AUTHENTICITY AND HISTORY INFORMATION.