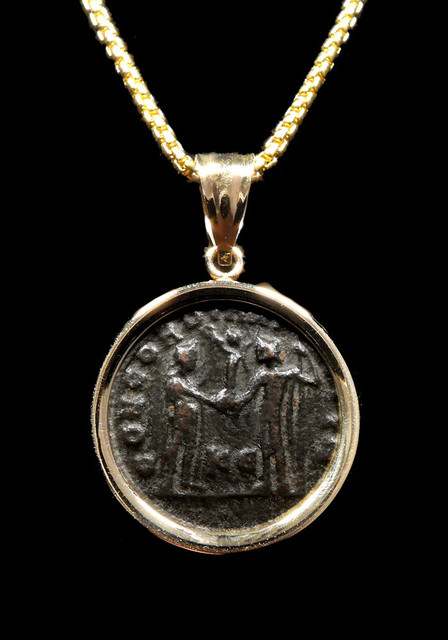 DISPLAYED WITH A MEDIUM ROUND WHEAT CHAIN

This ancient Roman bronze coin was minted between 286 - 305 AD during the rule of emperor Maximian.  It is set with the reverse side showing a detailed image of the god Jupiter on the right, handing the god Victory on a globe, to the emperor who stands on the left.  Encircling is the inscription"Concordia Militvm" meaning, "Unity of the Military".  It is set in a high polished 14K yellow gold smooth pendant setting in a unisex design making this pendant equally fitting for wear by either a man or woman.

The coin features superb detail and high relief of the side show, as well as a beautiful dark chocolate patina.  This is a perfect piece for any military enlistee or veteran, as well as the husband or wife or parent of a member of the military.  From a time when the military of Rome personified honor, serving as the ultimate protector of the order of one of history's greatest societies.

Maximian, born Marcus Aurelius Valerius Maximianus Herculius, proved himself on the battlefield with his bravery and ferocity.  He became a trusted officer and friend of the emperor Diocletian, who made him Caesar July 21, 285 AD, and Augustus April 1, 286 AD.  The two worked well together with Diocletian's intellect and Maximian's military prowess.

Maximian's home was in Trier but as active as he was on the battlefield, he rarely spent time at his residence.  Assigned the government of the West, Maximian defeated native revolts and a German invasion in Gaul, but he failed to suppress the revolt of Carausius in Gaul and Britain.