My use of ancient Biblical coins in jewelry encompasses both a perspective on the coins historically used by ancient Israel, as well as coins of Biblical prominence as mentioned in the Bible.  To appreciate the use of Biblical coinage in jewelry, one must first understand the historical beginnings of these coins in ancient Israel. From the sixth to the fourth century B.C., Israel was part of the Persian Empire.  In 538 B.C., Cyrus who was the King of Persia, allowed the exiled Israelites to return to their land and it was during this period that the first coins were struck and used in Israel.  The early Jewish issues resembled coins from Athens with Hebrew inscriptions of "YEHUD" or "YEHUDAH".  These coins also often featured a classic design in Jewish art, the lily. 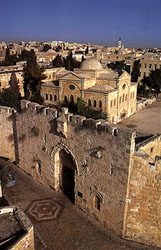 When Alexander the Great defeated the Persians in 331 B.C., new coinage bearing the head of Herakles (also meant to resemble Alexander), was quite prevalent in Israel.  Later upon his death in 323 B.C., Israel fell under the rule of the Ptolemies of Egypt and many Ptolemaic coins found circulation in Israel during this time.  Ptolemy II ruled with great favor for the Israelites.  He is best remembered as having the five books of Moses (the Bible) translated in Alexandria into the Greek language by 72 scholars, hence the reason the Bible is also called the "Septuagint", meaning "the seventy".  An early mention of the concept of money in the Bible occurs in Genesis where Abraham is purchasing a burial place for his family.  The discussion of an actual weight standard that is translated as "shekel" is written as follows, "Abraham weighed to Ephron the silver, which he had named in the hearing of the children of Heth, four hundred shekels of silver, current money with the merchant.  So the field of Ephron, which was in Machpelah... and the cave which was therein... were made sure unto Abraham for a possession of a burying place." (Genesis 23:15 - 20)   We know though, that this could not have been coins as there would have been no need to weigh the silver since coinage is minted in standardized weights, hence the purpose of coinage in the first place.

Nevertheless, we see that a standard of weight had been established in the barter system at this early point in history.  The silver mentioned in the early Biblical record was most likely in the form of ingots or jewelry.  Coins were not invented until just before the first book of Chronicles. 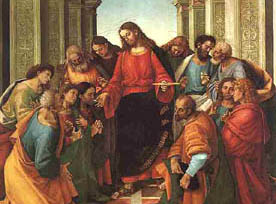 While the interest of Biblical coins relates most to the history of ancient Israel and the Old Testament, the ancient coins of the New Testament and early Christianity are also quite popular and many are featured in our jewelry.  A great example of this is the wonderful story that surrounds the "widow's mite" coin, the lowest denomination coin circulating during the time, the prutahs of Alexander Jannaeus.

In describing an incident that involved Jesus, the disciple Mark wrote, "He sat down opposite the treasury and watched the people putting money into the treasury, and many of the rich put in a great amount.  A poor widow came and put in two small coins, the equivalent of a penny.  Then he called his disciples and said to them, 'In truth I tell you, this poor widow has put more in than all who have contributed to the treasury for they have put in money then could spare but she, in her poverty, has put in everything she possessed, all she had to live on'".