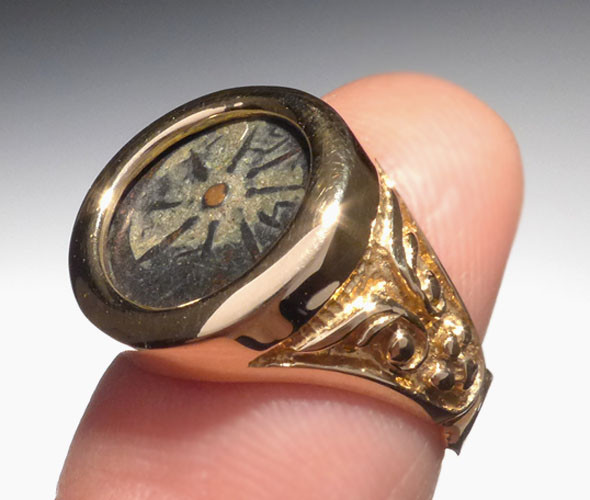 Looking as if made in antiquity specifically for the emperor or empressthis, this stunning cast 14K yellow gold ring features a GENUINE ancient widows mite (bronze prutah) coin of the finest quality.  Equally at home on a woman's or man's hand, the design is unisex and very classy.  A rich presentation of authentic Biblical history in a classic, ancient look!  The ancient bronze coin is held in from the underside of the ring by four prongs.  The smooth polished heavy gold design around the coin protects and highlights the ancient bronze colors of the coin in this extremely comfortable ring.

Christian jewelry varies widely in design and style but nothing is more profound than Christian jewelry featuring GENUINE artifacts (ancient coins) from the time of Christ and the early days of Christianity.  One of the most popular ancient Biblical coins has its roots in New Testament history.  It is the wonderful story that surrounds the "widow's mite" coin.  The widow's mite was the lowest denomination coin circulating during the time of Christ, the small bronze prutahs issued by Alexander Jannaeus.  These coins feature various designs including anchors, stars, cornucopias, lily flowers and a palm branch.

In describing an incident that involved Jesus, the disciple Mark wrote, "He sat down opposite the treasury and watched the people putting money into the treasury, and many of the rich put in a great amount.  A poor widow came and put in two small coins, the equivalent of a penny.  Then he called his disciples and said to them, 'In truth I tell you, this poor widow has put more in than all who have contributed to the treasury for they have put in money then could spare but she, in her poverty, has put in everything she possessed, all she had to live on.'"

THIS LISTING IS FOR THE RING AND COIN SHOWN.  IT WILL SHIP IN A SIZE 6 1/2.  FINGER SIZING IS A SCIENCE THAT REALLY NEEDS TO BE DONE IN PERSON.  WE SUGGEST PURCHASING THE RING FROM US AS IT COMES AND THEN HAVING A LOCAL JEWELER SIZING THE RECIPIENT AND CUSTOM SIZING THE RING IN THEIR STORE SO YOU HAVE A PERFECT FIT.