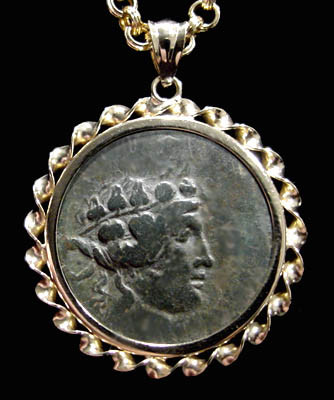 Large and classic, this magnificent GENUINE ancient Greek bronze coin featuring the Greek god of wine, DIONYSOS, is not just a unique piece of jewelry - it is wearable genuine ancient art!!!  The twisted edge design of the high polish 14 K yellow gold wonderfully compliments the wispy twists and curls of Dionysos' hair in the coin.  Another fantastic feature of this very large and exceptionally well-preserved coin is the detail and patina - a dark rich green, the most coveted patina of any ancient bronze artifact or coin.  The reverse side shows Hercules standing, resting on a large club in his right hand, and holding a lion skin on his left arm.

Definitely a rare and one-of-kind masterpiece, you can bet no one will be showing up at the party with one like it!  Extremely aesthetic and unique.

In Greek mythology, Dionysos was the son of Zeus and Semele.  Dionysos, one of the most widely worshiped gods of Greek mythology was considered a patron of the arts.  Dionysos was the god of fertility and wine.  Later he became the god of vegetation.  Still later he was the god of pleasures and of civilization.  In his early years the young god Dionysos learned to make wine and journeyed across the world to give it to the mortals.  It is wine that Dionysos is most remembered as the god of and later under the Roman Empire, this god would be worshipped as the Roman god of wine, Bacchus.

Dionysos was represented in works of art as a beautiful youth, crowned with ivy vine leaves.  His festivals were celebrated with processions, dances, and choruses, out of which grew the Greek drama and the Greek theatre.  Dionysos plays an active role in many works of poetry, tragedy and comedy (he was the patron god of the theatre, after all), and of course, has his share of mythological stories. One of the most intriguing is the story of Dionysos at Sea, told by Homer in one of his numerous hymns.

Pirates who once thought he was a mortal prince that could be held for ransom abducted Dionysos.  As a god, Dionysos shackles just fell away and he stood there smiling mysteriously.  The helmsman shouted to his crew "We have a god in our midst!" but they did not heed him and set sail.  Then a series of miraculous events occurred.  First, the ship was filled with wine and then the ship sprouted vines heavy with grapes.  After this, Dionysos transformed himself into a lion and attacked the captain.  The crew jumped overboard and were transformed into dolphins.  Only the helmsman who had recognized Dionysos was spared.

A true masterpiece combination of fine jewelry craftsmanship and GENUINE ancient art!  HIGHLY recommended and one of a kind.