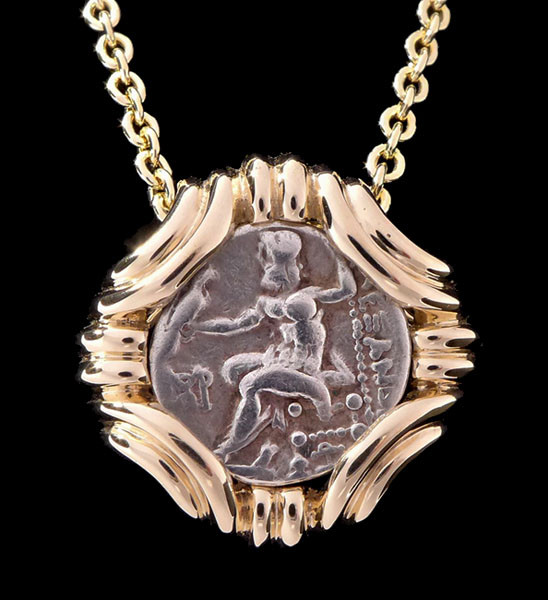 DISPLAYED WITH A THICK FORSANTINA CHAIN

The legend of Alexander the Great untying the Gordian Knot of ancient Phrygia is famous for it was written that an oracle declared that whoever would untie the knot would be the Ruler of Asia.  While wintering in Gordium, in frustration, Alexander the Great drew his sword and cut the knot, an ancient example of "thinking outside the box", as some may put it!  That evening, there was a violent thunderstorm, interpreted by Alexander's prophet Aristander, to mean that Zeus was pleased with Alexander's solution and many victorious conquests would be his reward.

This unique high polished 14 karat yellow gold cast pendant is made in the design of an intricate knot to commemorate this historical moment.  In its center, a GENUINE ancient Greek silver drachm coin is featured.  The reverse of the coin is shown, displaying the primary Greek god ZEUS seated on his throne, holding a scepter in one hand and his personal golden eagle messenger bird in the other. This remarkably beautiful coin was minted under the rule of the famous Alexander the Great.  The pendant setting is also unique in that it has a HIDDEN BAIL whereby the chain is threaded through two loops in the back to give the impression the coin pendant is floating on the chain.  Several photos above show the top and back view, as well.  The luster of the ancient silver is a fine compliment to the rich yellow karat gold of the setting. This coin shows a very beautiful and well-centered depiction of Zeus and natural dark silver patina around the fine detail makes the artwork stand out. The eagle in Zeus's hand was called AETOS DIOS and was a mythical giant golden eagle that served as a personal companion to Zeus and also his messenger. This is a handsome piece and ideal as a unique pendant for either a man or woman. The Greek ancient art style is wonderfully captured in this piece of genuine wearable ancient history!

Alexander was born 356 B.C. in Pella, the ancient capital of Macedonia. He was the son of Philip II, king of Macedonia, and of Olympias, a princess of Epirus. His tutor was Aristotle, who trained him in rhetoric and literature and stimulated his interest in science, medicine and philosophy. In the summer of 336 B.C., his father was assassinated and Alexander ascended to the Macedonian throne. At this time, Alexander (and his kingdom) was extremely vulnerable with considerable unrest at home and abroad. This was all put to rest by a string of events that immediately elevated Alexander III to being known as Alexander the Great. In 335B.C., as general of the Greeks, Alexander carried out a successful campaign against the Thracians defeating them swiftly. On his return he crushed in a single week, the threatening Illyrians and then hastened to Thebes, which had revolted. He took the city by storm and razed it, sparing only the temples of the gods and the houses of the Greek lyric poet Pindar, and selling the surviving 8000 inhabitants, into slavery. Alexander's promptness in crushing the revolt of Thebes brought the other Greek states into instant and unconditional submission.

It is said that while visiting Athens to seal a pact, Alexander visited the Oracle at Delphi despite it being a day when prophecy was forbidden. In his attempts to drag the priestess to the place where she gave her Oracles, she screamed, "My son, you are invincible!" This event would never be forgotten and had profound influence on Alexander's boldness and self image for the rest of his short life.

Alexander was a great military mind having been the son of a great warrior and tactician. By the time Alexander had come to rule, he had already taken part in numerous battles with his father. Alexander's father, Philip II, developed the PHALANX, the most notable and effective weapon of ancient Greece. The phalanx was a box formation for infantry soldiers from 8 to 36 men deep. The men in the front carried spears of about four to six meters (12 to 18 feet), that were usually held in an upright position so tight that it created a wall. This wall of spears helped hide what was going on with the units behind the formation. When held horizontally, enemies could be killed at a safe range from the formation. The phalanx was revolutionary for its time and was a very potent weapon. It was only surpassed when the Romans developed the legion, another infantry formation with different weapons and armor. Alexander was able to put together a very impressive army and his military accomplishments are legendary and endless, it seems. He was an expert at organizing his units for complex battle maneuvers, hiding the true numbers that make up of his forces, and managing his army during the ever-changing flow of battle.

Near the point of his death he began to believe he was a god and promoted himself as such to his kingdom. He claimed he descended from Herakles (Hercules) and began minting coins that depicted himself as Herakles. His mother even told him that a serpent had impregnated her rather then his father (whom she passionately despised shortly after his birth) adding to his thoughts that he was a god. Before his death, Alexander the Great had some of his cities worship him as a god. With his accomplishments and influence on the classic ancient world that lasted long after his untimely death at the age of just 33, no mortal truly came closer to being a "god" than Alexander the Great!

This piece typifies the beauty of Greek mythology and ancient Greek art styles. The detail, preservation and center of the strike makes this a finest quality collector-grade ancient coin, perfect for a fine jewelry centerpiece as seen above!