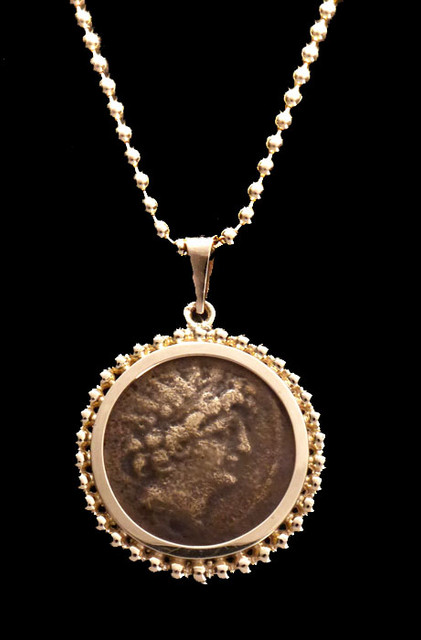 Possessing fantastic Hellenistic Greek art style, this wonderful genuine bronze ancient Greek coin dates to the rule of Antiochos VIII.  Antiochus Grypus (nickname for "Hook Nose"), as he was called, was a ruler in the Greek Seleukid Empire in 125 B.C..  A story of his luxurious parties report he would send food home with guests who attended his banquets, complete with a camel and accompanying attendant to carry the guest himself.  This should certainly have caused some strain on the already depleted treasury.

The obverse is shown featuring Antiochos wearing a radiate crown.  The reverse shows a standing eagle and Greek inscription.  To compliment the imagery of the crowned ruler, the coin is set in a hand-made 14K yellow gold beaded pendant setting.  An unusual feature of this particular bronze coin is the notable yellow color to the metal versus the typical reddish or green patinated surface.  This yellow bronze makes for a rich appearance along with its karat gold setting.

Antiochus Grypus was the son of Demetrius II Nicator and Cleopatra Thea. He was crowned as a teenager in 125 BC after his mother had killed his elder brother Seleucus V Philometor, ruling jointly with her. After Antiochus defeated usurper Alexander II Zabinas in 123 BC his mother tried to poison him with wine, but the suspicious king forced her to drink the cup herself.

Despite political shortcomings, Grypus was a popular king. His ugly, lazy appearance on coins (common among the last Seleucids), together with stories of his lavish banquets, made posterity believe his dynasty was degenerated and decadent. This was however, a conscious image, an invocation of the Hellenistic idea Tryphe - meaning good life. The last Seleucid rulers strove to be associated with a life of luxury as opposed to the exhausting civil wars and feuds which troubled their reigns in reality.

With it unusually high relief, well-centered strike and remarkable preservation, this is a COLLECTOR-GRADE ancient Greek bronze coin of the Seleukid Empire and a wonderful subject for a highly unique and attractive ancient Greek coin pendant.

The Seleucid (Seleukid) Empire was an ancient Greek Hellenistic state ruled by the Seleucid dynasty, which existed from 312 BC to 63 BC. It was established by Seleucus I Nicator following the division of the Macedonian empire vastly expanded by Alexander the Great. Seleucus received Babylonia and, from there, expanded his dominions to include much of Alexander's near eastern territories. At the height of its power, it included central Anatolia, Persia, the Levant, Mesopotamia, and what is now Kuwait, Afghanistan, and parts of Pakistan and Turkmenistan.

The Seleucid Empire was a major center of Hellenistic culture that maintained the preeminence of Greek customs where a Greek political elite dominated, mostly in the urban areas. The Greek population of the cities who formed the dominant elite were reinforced by immigration from Greece. Seleucid expansion into Anatolia and Greece was abruptly halted after decisive defeats at the hands of the Roman army. Their attempts to defeat their old enemy Ptolemaic Egypt were frustrated by Roman demands. Having come into conflict with Chandragupta Maurya of the Maurya Empire, after several defeats, Seleucus entered into an agreement with Chandragupta Maurya where he ceded vast territory west of the Indus, including the Hindu Kush, modern day Afghanistan, and the Balochistan province of Pakistan and offered his daughter for marriage to the Emperor to formalize the alliance. Much of the eastern part of the empire was conquered by the Parthians under Mithridates I of Parthia in the mid-2nd century BC, yet the Seleucid kings continued to rule a rump state from Syria until the invasion by Armenian king Tigranes the Great and their ultimate overthrow by the Roman general Pompey.