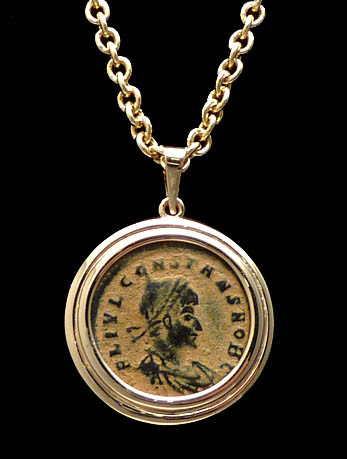 With its magnificent, very rare detail and bi-color earthen patina, this is a stunning ancient Roman bronze coin from the early Christian days of the Roman Empire.  This coin was minted during the rule of a descendant emperor from the lineage of Constantine the Great, the first ruler of the Roman Empire to convert to Christianity.  The high polished, cast 14 karat yellow gold pendant setting showcases the ancient patina color wonderfully.  Perfect for either a man or woman to wear this piece of genuine Ancient Roman history.